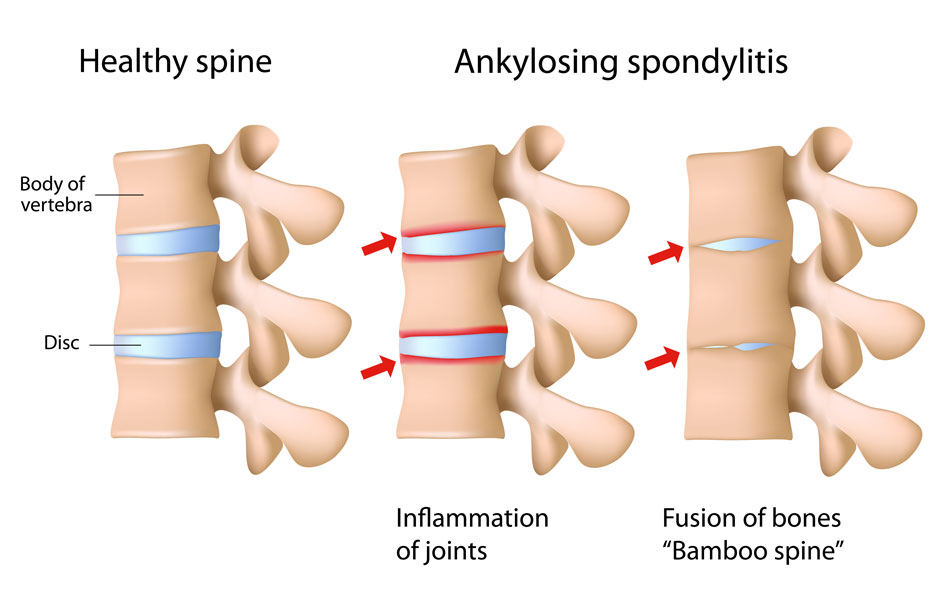 What is Ankylosing Spondylitis?

Ankylosing spondylitis is a form of ongoing joint inflammation (chronic inflammatory arthritis) that primarily affects the spine. This condition is characterized by back pain and stiffness that typically appear in adolescence or early adulthood. Over time, back movement gradually becomes limited as the bones of the spine (vertebrae) fuse together. This progressive bony fusion is called ankylosis.

Ankylosing spondylitis is likely caused by a combination of genetic and environmental factors, most of which have not been identified. However, researchers have found variations in several genes that influence the risk of developing this disorder.

A rheumatologist is commonly the type of physician who will diagnose ankylosing spondylitis (AS), since they are doctors who are specially trained in diagnosing and treating disorders that affect the joints, muscles, tendons, ligaments, connective tissue, and bones. A thorough physical exam, including X-rays, individual medical history, and a family history of AS, as well as blood work (including a test for HLA-B27) are factors in making a diagnosis.

Currently, there is no known cure for AS, but there are treatments and medications available to reduce symptoms and manage pain. Recent studies show that the newer biologic medications can potentially slow disease progression in some people. Note that different people respond to different medications with varying levels of effectiveness. Thus, it may take time to find the most effective course of treatment.

Plan your visit to our Clinic

More
Copyright ©2019 all rights reserved
Visit www.onz-online.de for our full spectrum of ONZ orthopedics and neurosurgery